The Air Quality in the coop

The Gas sensors measure and record the list of gases and upload to the Cloud once every 10 minutes. Google Charts is utilized to generate interactive charts. Arduino uno is used as the microcontroller to control data collection and upload to the cloud. The upload is performed using the Ethernet Shield for Arduino. The Javascript code for taking the measurements and uploading to the Cloud is straight forward and there is memory left in the Arduino. The grove base shield is simply a fan out shield that allows the Gove Connectors to be used. The direct Digital, Analog and I2C pins can be used directly without the Base Sheild.

PC board and sensors 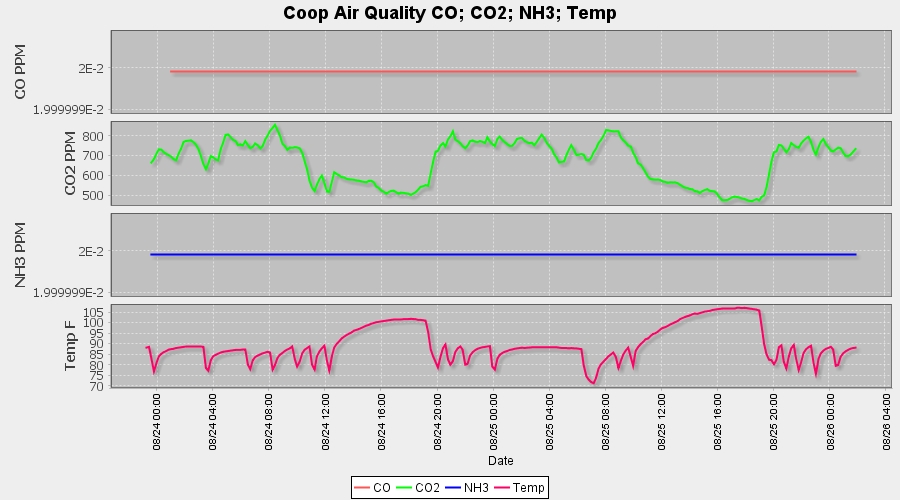 Raw Sensor Output for all gases Web Page (can be slow)

One of the girls, Mac had symptoms of abdominal distension, stiffness in her walk, very low appetite, and seemed to breath hard at times. When I would pick Mac up I could feed her abdomen was swollen and very warm to the touch. Mac's abdomen was also very sensitive to touch. I seperated Mac from the other chickens and started her on an antibiotic treatment of Baytril 10%. We kept Mac in a large pet carrier, mostly with the top off. She had very low energy and she didn't seem to want out. She ate very little and pooed very little. It took a while to get a vet appointment, he drew some of the fluid out of her abdomen and confirmed the peritonitis. I was instructed to discontinue the antibiotics. Apparently, the low appetite is due to her body cavity being full and she needed to process the yolk out of her system. I asked the vet if Mac needed to have the fluid drained and the vet indicated that would cause Mac more stress. The vet asked that I give Mac Milk Thistle everyday and keep Mac in a low stress environment for the next two to 4 weeks but make certain Mac got some sunlight. The vet indicated there was about a 25% chance Mac would not lay eggs again.

So I would feed Mac some baby food with Milk Thistle added every day and take her out into the sun to walk for about 30 minutes. We kept Mac in the house (low stress) and left Mac sitting in the half pet carrier, and to keep her entertained, we turned on 'DOGTV'. It seemed that Mac was actually entertained by this channel!? Slowly Mac started to improve, Her walking seemed less laybored, she started eating and pooing more, she started showing some energy.

We then started to re-introduce Mac to the other chickens. We placed Mac run adjacent for about 3 days. We would let them all out to walk around the yard at the same time. There were some definite pecking order issues. Mac always was the runt being the smallest but now she had lost a lot of weight and was really small. Mac did re-insert herself in the pecking order and even though she is the smallest (by far) she is one up from the bottom of the pecking order.

This week I heard Mac egg announcing in the chicken coop (chickens often announce to the world when they have produced and egg). Then when I listened I noticed that Mac was very pronounced about it. I went to investigate and I found a small but very nicely formed egg in the nesting box Mac had used. The very next day, another egg.

So it seems chickens can recover from egg yolk peritonitis.